Yep, I Co-Wrote a Book

I received a message on Ancestry from someone I’d never contacted before.

I have been reached out to in the past, of course — my family tree has about 4000 people in it, and on occasion I get contacted from people asking for, or offering info on someone.

This time it was a one-liner. From someone I only had a 6cM DNA match with — so low that it’s possible it was a false positive.

This user turned out to be a 3rd Cousin, 2x Removed.

His name is Dr. Hubert Horton McAlexander. Josiah Meigs Professor Emeritus at the University of Georgia.

What would a man with his own Wikipedia page want with ME?

Turns out we’re both descended from a common Wadlington ancestor. The Wadlington name goes back to the American Revolution. Dr. Alexander had done years of research over a few decades, with several Wadlington descendants.

He wanted my help — MY help! — to publish what would likely be his final book on this line of ancestry.

Lucky for him, I wanted to do more research on this line, but the last two Wadlington genealogical book authors never responded to me. And lucky for me, he was willing to share decades of knowledge.

A partnership was born. An 80 year old man in Georgia, with a 38 year old distant cousin in New Jersey.

Well, okay, not so much a “partnership”. Hubert did the writing. I did some editing and much of the research, pouring through FamilySearch images of deed books and things that weren’t indexed yet (and thus wouldn’t show up in a website search).

A Year Later, the Baby Was Born 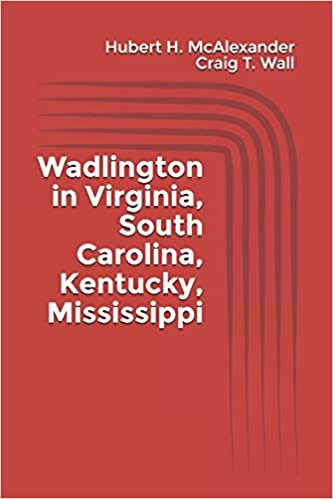 The target market for this book is about 7 people, I know. It’s not something you write for the money, and we certainly didn’t.

It’s more of a research paper in book form.

The Wadlington family came over from England in the mid-to-late 1600s. Nobody’s been able to determine exactly which ancestor started this line.

However, the first person we know of with definitive records, and is more-or-less recognized as the patriarch of this line, is Thomas “Ole Tom” Wadlington (1715-1777), born in Virginia and died after moving to South Carolina.

Thomas would have 8 known children, including 5 sons, all of whom served in the Revolution to some capacity. Hubert and I descended from his son Edward Wadlington (1751-1790), and that’s where this book picks up.

The children of Thomas Wadlington split up into two cadet clans:

The other three sons moved with Ole Tom Wadlington to the Newberry, South Carolina Area, including our ancestor Edward.

Edward Wadlington (1751-1790) stayed in Newberry, SC with his wife Frances George until his death.

Edward had four sons. The oldest John died in young adulthood after moving in with his relatives in Kentucky.

What we follow in the book is not exactly a triumph. These were hard times.

Jesse and Bailey George (our ancestor) likely traveled together through these states and even lived together (Bailey was likely an adult living with Jesse on the 1830 Census).

There are records of Jesse having sold slaves in Tennessee to pay off a debt. As new lands opened up in the south for settlement, these Wadlingtons tried to take advantage of what many people thought of as prime cotton-growing land, chasing money. The three brothers would live next to each other in Yazoo County, Mississippi.

Unfortunately, they were caught up in the Panic of 1837, when cotton prices sank and over-leveraged plantation owners went bankrupt.

Bailey George Wadlington managed to make it through the financial crisis without losing his land.

Jesse and Spencer on the other hand, were over-leveraged and went essentially bankrupt.

In the Holmes County, MS deed book, Jesse is shown agreeing to a loan repayment plan in September 1836.  The stipulation is that if he missed a payment, his land would be auctioned off to pay for it.

Out of Places to Migrate… Except One: Texas

These families moved to four other states as land opened up, just to go financially bankrupt. Where were they to go?

Luckily, one place was not just taking migrants, but practically begging people to come.

The Independent Republic of Texas had recently claimed its independence from Mexico.

The new Texan government needed infrastructure and population to defend itself, but as a new country it had almost no printed money. What Texas DID have a lot of was land.

So it created a headright grant system — get a grant for acres of land, improve the land for a few years, and the land is yours.

Bailey George would stay in Mississippi, where our ancestors would stay for 4 more generations until a branch — my branch — moved to Newark, New Jersey in the early 1940s.

What Does This Book Add or Establish That the Other Wadlington Books Don’t?

The most notable previous Wadlington book written was “That Wadlington Family and Others“, by Donna Humphrey Metzger (2007). The book is free to view on FamilySearch.

That book focused on the same initial Wadlington (“Ole Tom”), but down through his son James Wadlington (1745-1800), where ours runs through James’s brother Edward Wadlington.

We established what we’d consider extremely strong evidence that Edward Wadlington’s wife was named Frances George. For about 10-15 years prior at least, her name was recorded as Frances Spencer, and we couldn’t figure out why. There was no evidence why.

However, we found a slave sale deed where Spencer C. Wadlington (from the above story) received slaves as a gift to Spencer’s children. The gifter — Whitson H. George — referred to the recipients as “my little cousins”, naming Spencer’s kids.

There are also numerous instances in the Census of Wadlingtons and Georges living nearly adjacent to each other, including in Yazoo County, Mississippi.

In addition to this, the children of Jesse Wadlington (1782-1841) were unknown because he died without a will, and before Census records tracked entire families.

Because the fight over Jesse’s estate took many, many years, court authorities in Harrison, Texas deposed Jesse’s brother, Spencer C. Wadlington, in 1850 to ask what he knew of Jesse.

By some stroke of luck, the court-recorded answers to those questions still survive today, in an archive in the East Texas Research Center at Stephen F. Austin University, in Nacogdoches, TX. I paid for a copy, and Jesse’s children were listed in there as sworn testimony from his brother.

This info helped establish the family relationships of several other Wadlingtons in that time period, whose parents were unknown.

What is The biggest outstanding mysteries in this line?

Dr. Alexander is a descendant of that daughter, which meant, at least on that line of ancestry, we were only half-cousins.

He tried to find the identity of that mystery wife. Several other Wadlington descendants also tried, in correspondence I was sent spanning about 20-25 years, if not longer.

Bailey George wasn’t listed by himself on the 1830 Census, but instead was part of brother Jesse’s household, so that offered no clues.

Their daughter Frances lived past 1880, when the Census started asking for the birth location of one’s parents. Her father was listed as from Kentucky (which was wrong), and nothing listed for the mother, which indicates that either they thought both parents came from KY, or they had no idea about the mother.

One day someone will come up with an answer to this, I’m sure.